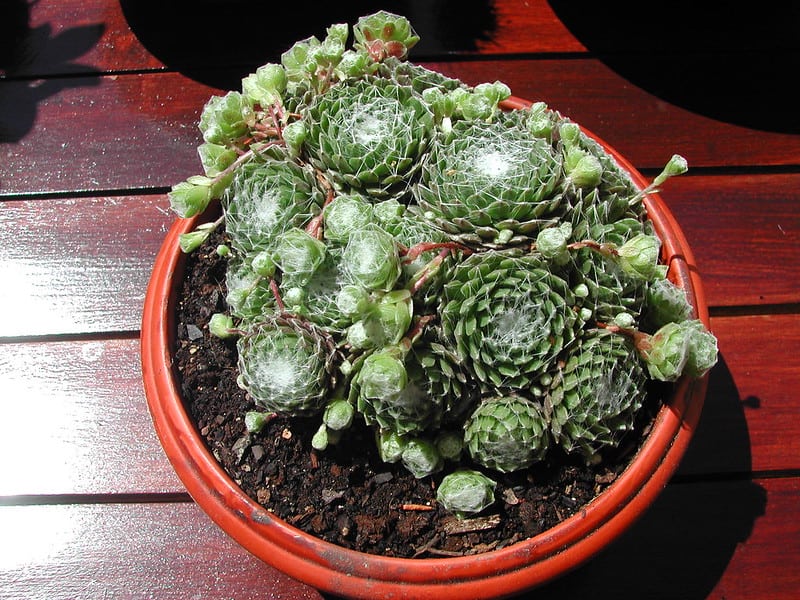 If there is a characteristic that attracts the attention of this species of the genus Sempervivum arachnoideum “Cebenese” “Cobweb Houseleek”, it is the fluff or spiderwebs in the form of a spider web that grows in the rosette of leaves that make up this Crassulaceae.

These villi can cover almost the entire plant.

Throughout history this Sempervivum arachnoideum has been innumerable hybridized, being able to choose today an infinity of varieties.

But how is this fluff formed?

Being a rosette, the leaves leave from the center of the plant out.

This protective fluff is concentrated precisely in the center of the rosette.

When new leaves come out, they are pushing out the oldest ones that take part in this protective tissue with them at the pointed ends of the leaves, forming at the end, a mesh joined from the tips of the leaves towards the center.

The result is surprising.

It is originally from southern Europe, northern Africa, and the Middle East mainly.

Rosettes generally exceed 5 cm, although they conolize and cover the soil where they are very well, becoming unseen due to the dense mantle they form.

It could not be considered invasive because it is not difficult to control it (it is slow-growing) in a rockery or stony garden, which is where they develop well. It blooms in summer although the first flowering takes eternities.

Tips to take care of the Sempervivum arachnoideum “Cebenese”

They don’t even need almost any land to live.

I’ve seen them grow in cracks and rocky walls.

To cultivate this succulent plant, a very well-drained soil must be used, either in the form of sandy soil, sand or rocks. It is very important to have good drainage because succulents are very susceptible to excess water and moisture.

For this reason even though the substrate does not have to have any kind of nutrients, if it must have good drainage, to prevent the roots of the plant from rotting or even the plant dying.

Sempervivum can grow in a wide range of climates, provided they have sown in full sun or a bright place.

They can tolerate light shadow, but not in deep shadow.

Even though the plant tolerates full sun, it is important to take care of the sempervivum from the excessive sun to prevent the leaves of the plant from dying.

Some varieties of the sempervivum can vary in their colors, depending on the amount of sun they receive, for example in the shade they can have a light green color.

Inside: As we mentioned earlier, Sempervivum accumulate water in its leaves, for this reason, they do not need very constant irrigation, but still need water to thrive.

To water the plant just let the soil dry completely between irrigation and irrigation.

Water them more frequently during the heat of summer, but don’t water them too much.

If you see that your plants begin to have problems, make sure that the soil drainage is good and reduces irrigation.

When the plant is inside it does not need so much irrigation, because the substrate takes longer to dry compared to if it were outside.

For this reason, you should make sure that the pot where you plant your Sempervivum ensures that the pot has a drain hole so that the substrate can remove excess water.

And you must reduce watering in winter.

Outside: If Sempervivum is in full sun the plant must receive the necessary amount of water since the substrate dries much faster.

But as if it were inside, you must wait for the substrate to be dry between irrigation and irrigation, and reduce irrigation during winter times.

They do not need to be fertilized, but if you want to do it, you can feed the substrate with worm humus once or twice a year.

But do not use compost. In case you choose to use a liquid fertilizer, use ¼ part of the dose recommended by the manufacturer.

If you want to transplant your Sempervivum, you must remove the Sempervivum from its pot and plant it in a new, larger pot.

If you do the transplant the best time to do it is in spring or autumn.

Sempervivum is frequently attacked by mealybugs (the cottony one is the most common), mites, aphids, and snails.

All these pests cause wilting of the leaves and wounds on leaves and stems that allow the proliferation of lethal pathogenic fungi.

Another very common disease of Sempervivum is rot due to excess irrigation. That is why it is better to have a shortage of water, and not an excess of it.

Sempervivum succulents can be easily propagated by division. Just follow the following steps and tips;

Once established roots can be planted or placed in full sun.

The seeds can also be sown in early spring, where they will usually germinate in two to six weeks.

The Sempervivum arachnoideum genus is made up of about 30 species of succulent plants from North Africa, the Middle East and Europe.

It is a small crass plant native to the Alps and the Carpathians that forms rosettes of about 5 cm in diameter at most.

It is an excellent covering plant that is extended by stolons forming compact masses.

The leaves are oblong and seem to have spider webs at their ends.

The flowers are red and appear in inflorescences that rise from the plant about 10-15 cm. They bloom in summer.

It is important to note that the rosettes that bloom later die but produce other lateral rosettes.

This plant is often used a lot for rockery although it can be grown in pots.

It can thrive in exposures in full sun or light shade, especially in very hot areas. Tolerates frost but not so strong heat.

It is enough with a soil formed by garden soil.

These Siemprevivas need moderate watering, being resistant to drought.

The best way to multiply them is from the little children that the same plant produces and that take root easily.